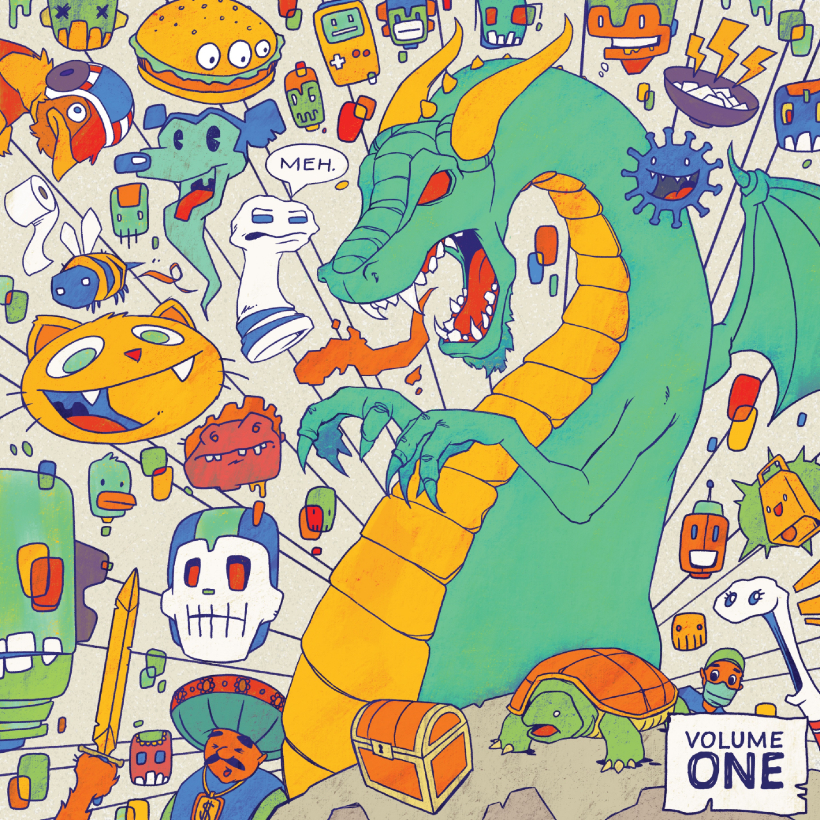 ​
As we all know, Mike Shinoda started streaming on Twitch and YouTube back in March and has kept it going on a daily basis since, rarely missing a stream. On one of his first streams he finished up the demo for Open Door which he released as a download later that day.


​
After a couple of months Mike has now decided to compile some of the songs that he worked on into a 12-song album compilation called Dropped Frames, Vol 1. In a statement to Spin.com Mike said:


“Dropped Frames is just as much about the live channel as it is about the ‘album’,” Shinoda says.
“The collection of songs is a highlight reel of the tracks I make on the channel, but a big part of the experience is the stream itself. When I start, I usually have very little idea of where it will go.
What comes out is a product of the viewers’ suggestions, my spur-of-the-moment ideas, and whatever inexplicable magic is floating in between.”

On his Instagram Mike had this to say about the album:


In March, when quarantine began, I started creating music live online. In addition to bringing the fans together for a daily conversation, the live streams inspired dozens of unexpected genre mashups and theme ideas. I'm excited to announce the release of my first batch of these instrumental songs.

My album “Dropped Frames Vol. 1” will be coming out July 10th. Leading the release is “Open Door,” a song that started out as a challenge called #singopendoor and evolved into a track featuring 7 fans from around the world.

“Open Door” is the only vocal-led song in the album. In times like these, when so much is being said, I felt an album of wordless tracks might hopefully give fans a place of respite—a break from the chatter. Listen to them while you chill, while you work, while you paint, while you eat, while you play...wherever they fit into your life.

With the announcement of the album Mike decided to release 3 songs, Open Door, Osiris, and Super Galaxtica. Open Door is the finished version of the song with a number of guest vocalists, it's the also the only song on the album that with singing on it. You can listen to all three songs here below.

Steve Aoki has dropped his new album "Neon Future IV" and among its whopping 27 tracks (across two sides) is a song called "Last One To Know" which features the talents of Linkin Park band member Mike Shinoda. Shinoda co-wrote and sings on the song in a duet with Canadian pop sensation Lights.

​
Aoki may be best-known for energetic electro-house but this song's production features major-key bright arpeggios and piano chords over a halftime future bass rhythm. It doesn't explode in the manner of his typical festival anthems, instead staying firmly in a radio-friendly pop space. The candid lyrics contrast with this upbeat vibe, with Shinoda and Lights bitterly ruminating on the emotional strain of miscommunications and failing relationships - the first verse begins, in fact, with Shinoda contemplating brazenly burning down an office.

This is, of course, not the first time Aoki has teamed up with Linkin Park: he and the band dropped a joint single, the aggressive electro banger "A Light That Never Comes", in 2013, and they followed that up by working together on a melodic house track called "Darker Than Blood" for Aoki's 2015 studio album "Neon Future II".

You can check out "Last One To Know" off the album "Neon Future IV" on Spotify.
Mike Shinoda Shares New Demo "Open Door"
Posted on March 17, 2020 by Kevin
Share Tweet
23 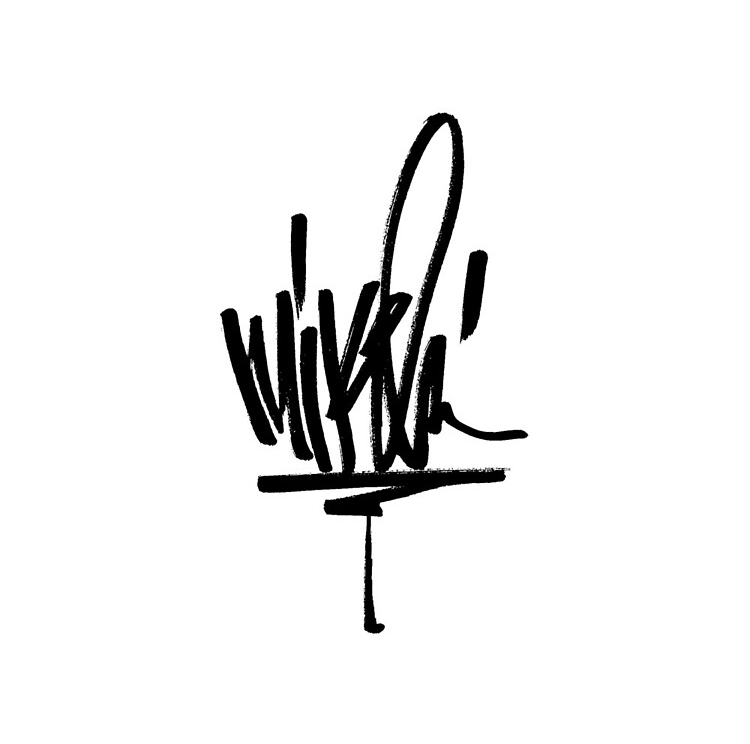 ​
Mike has recently embraced the service "Community", making it available for him and fans to send SMS-messages back and forth privately. Earlier in the day Mike went live on Instagram and showed him finishing up a demo called "Open Door", which he has now released on Community!

But, Mike gave the OK for the song to be posted online for the international fans, so here you go:


You can also download the song from this link.​
If you want to interact with Mike on Community you can do so by sending a SMS to 310-935-0302 (only for USA) and if you want to watch the recorded stream of Mike working on the song you can do so here

(credit to LinkinPark:br)
​
March 19 Update: Mike Shinoda releases stems for Open Door along with a jam he did on Instagram Live yesterday. Download them below.
​
OPEN DOOR STEMS AND WAV + MP3 DEMO DOWNLOAD​
What do you think of the song? Come and discuss in our forums!
“fine” Music Video Out Now
Posted on December 3, 2019 by Hybrid
Share Tweet
3

Mike Shinoda has just released the music video for his new song “fine.” Check it out below and let us know what you think about it in our forums!

​
Shinoda's new take on the song largely keeps to the template of the original song, but he has replaced the drums and basses with his own, in addition to providing new octaved guitar parts during the final chorus. An arpeggio synth also appears throughout the second half of the arrangement, and new pitched vocal edits briefly appear during the bridge and outro.


Having been lifelong fans of Mike’s work both in & outside of Linkin Park & Fort Minor, we were extremely flattered when we found out he enjoyed our record. We quite literally said “fuck it” and DM’d him on Instagram asking if he would remix a song not expecting a response. ‬

‬So, needless to say, it’s an incredibly surreal moment for us to be sharing his version of our song with the world today. He’s been a dream collaborator of all of ours and we are floored with what he’s done with ‘Grand Paradise’.

The post also reveals that this "Grand Paradise" rework is the first taste of an upcoming remix collection that Foxing have planned. More remixes are due to premiere in the coming months:


This is just the first track in a series of remixes to be released throughout the remainder of the year. More incredible work coming from The Chain Gang Of 1974, Psychic Babble, Bas Relief & Chris P. Thompson.


Grand Paradise’ is my favorite track off of Nearer My God, and I’m grateful the band let me remix it. The original has so many spectacular tracks and melodies, and I loved reinterpreting them.

The "Grand Paradise" remix is available on digital music services including Spotify. You can also check out the original version of "Grand Paradise" here. The album that the track is slated to appear on, "Nearer My God Remixes", has no set release date as of yet.

Mike Shinoda has released a brand new track titled "fine" which was written for the movie "The Blackout" which is in theaters across Russia on November 21st and Germany, Austria, and the Baltic States on November 28th.

You can check out footage of the movie in this video below which incorporates the track:

The new song is now out worldwide. 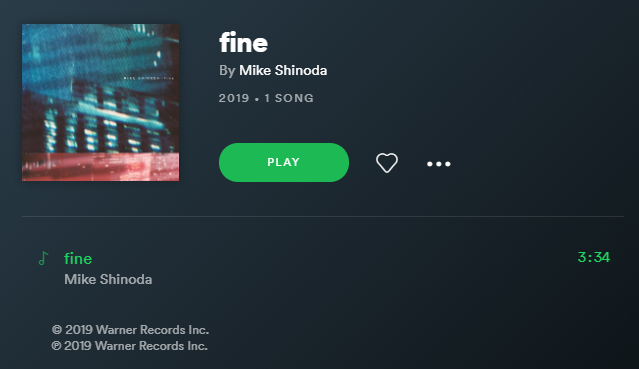 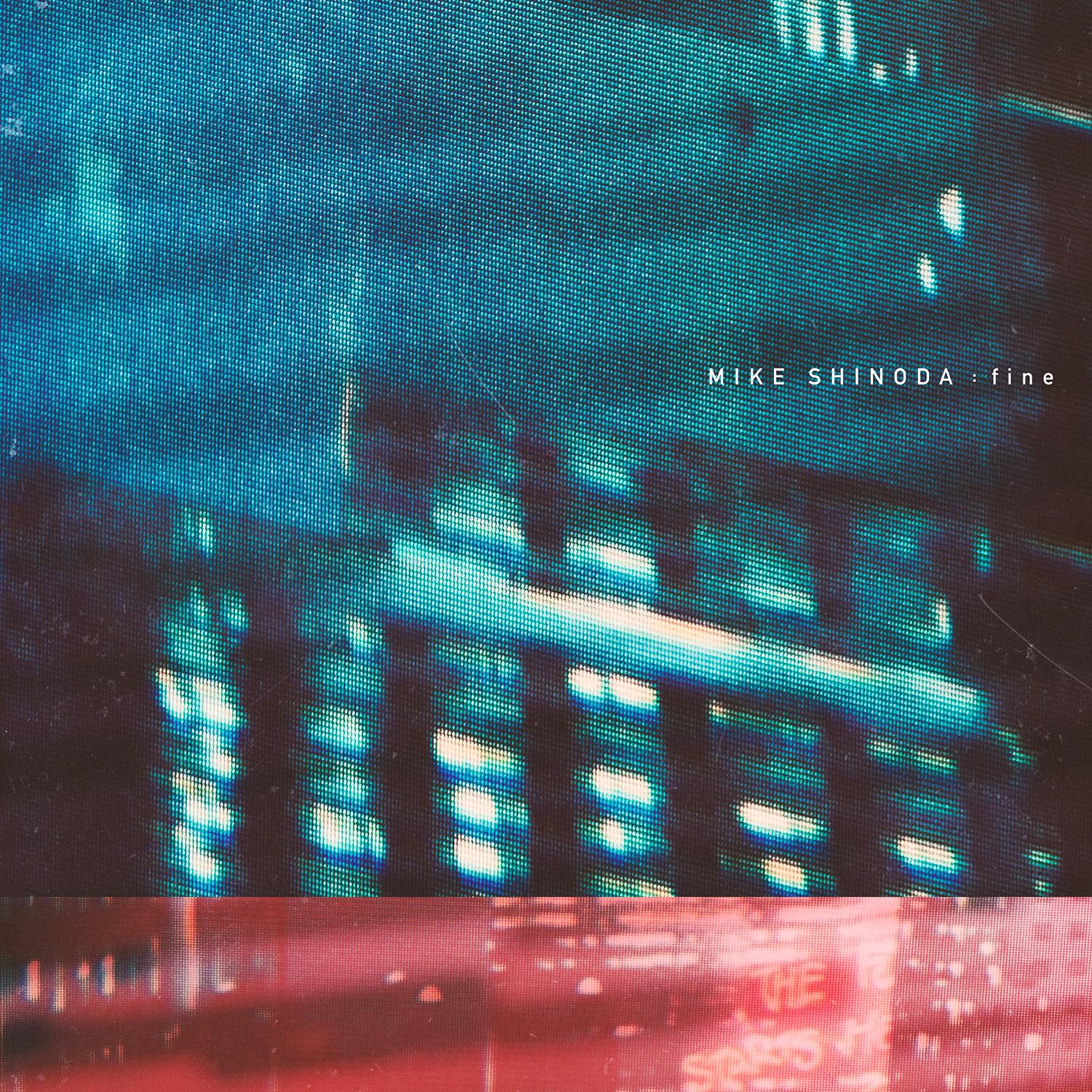 What do you think of the new song from Mike Shinoda?

Mike Shinoda has just debuted the new animated music video for his song "World's On Fire" from his 2018 album Post Traumatic. The video is as mentioned animated, the first animated video from this album and the first one since "Breaking The Habit" in 2004. The video is directed by Mike Shinoda & Juan M. Urbina. Check it out below.

This is now 15 out of 16 songs from Post Traumatic that has gotten music videos, the only one remaining at this point being "Hold It Together". If a music video for that song will come out remains to be seen. But while you wait you can check out all the other videos in this YouTube playlist
​
What do you think of the video? How many easter eggs could you find? Come and discuss in our forums!
Mike Shinoda teases "World's On Fire" video
Posted on July 2, 2019 by minuteforce
Share Tweet
7

You thought Mike Shinoda would be stopping after 14 "Post Traumatic" music videos, but he's about to exceed your expectations once again - it seems a video for fan-favourite album cut "World's On Fire" is on its way!


​
As Shinoda tweet states, the video will be an animated one, with his own designs forming the basis.

Shinoda will be making an appearance at 2019's Anime Expo in Los Angeles to give a preview of the video - he will be a part of a showing called the Crunchyroll Industry Panel, scheduled for Saturday, July 6. This panel is listed on crunchyroll.com as follows:

Fans worldwide should be able to tune in and check out this exclusive preview, as events at Anime Expo will be streamed live at anime-expo.org/live.

If you haven't been keeping track, this latest development means there is only one song left on the 16-track standard edition of Shinoda's album "Post Traumatic" that hasn't had a video created for it. He may well aim to close that gap in the future. Longtime Linkin Park fans will also note that this is not Shinoda's first foray into anime-inspired imagery - various anime works have influenced LP's video and album visuals throughout the years, most notably the "Breaking The Habit" video.

Even though Mike had said that his Post Traumatic tour ended with his shows in Israel earlier this year, Mike has just announced three more dates, all in Asia, that he will play in support of the album. This will be his second time in Asia playing shows for his 2018 Post Traumatic album, however he did not play in any of these countries on the run last year. 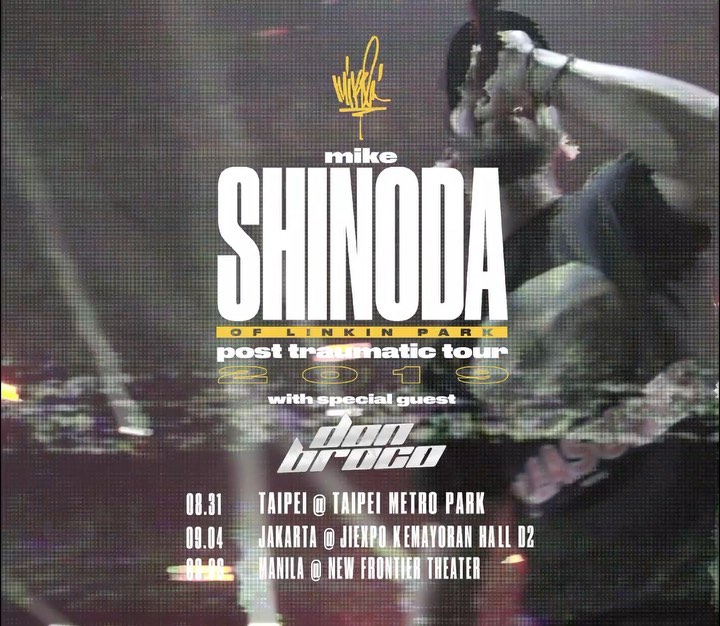 ​
He's adding these shows after announcing on May 30th that he will play at this year Wired Music Festival, taking place on September 8th in Nagoya, Japan. As of now, this is what his mini-tour in Asia looks like:

Are you planning on going to any of these shows? Are you hoping Mike will add more shows internationally, preferably closer to where you live? Come and discuss in our forums.

To celebrate the one year anniversary of the release of Mike Shinoda’s Debut Album, Post Trumatic, Mike released an alternate “rough sketch” version music video of his single “Crossing A Line.” This “rough sketch” of the video also features an unfinished version of the song along with a video that Mike recorded entirely by himself on one late night during a stroll down Sunset Blvd.

Check out the video below and let us know what you think about it in our comments!

The LPA is powered by fans like you. Please consider donating to help towards our monthly hosting costs!

Download this collaborative remix album for free in MP3 and FLAC formats.

Listen to all past winners of our monthly remix contest all in one location.

Download all past episodes of the LPA Podcast, featuring special guests and fan conversation related to Linkin Park.