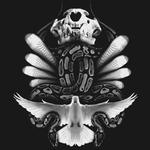 This goes out to everybody still hatin', Male, from Upminster, Havering, United Kingdom